Kanelbullar, sticky buns, cinnamon buns, and cinnamon rolls; isn’t it all the same? Not quite! It is similar, and it is suspected that the original cinnamon bun comes from Scandinavia. But in this vegan cinnamon rolls recipe we share an American version: nice and sweet, with icing. We make it a quick recipe, because we […]

Kanelbullar, sticky buns, cinnamon buns, and cinnamon rolls; isn’t it all the same? Not quite! It’s similar, that’s certainly true, but kanelbullar (the Swedish cinnamon rolls) are truly unique because of the cardamom flavor. We have tasted a lot of kanebulle in Sweden and thought it was about time to make them ourselves – but […] 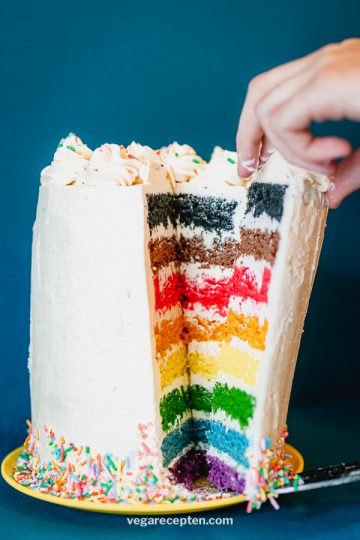 We have already made many rainbow recipes such as rainbow cookies, rainbow pizza, rainbow smoothie and even rainbow mini pancakes! And of course a (vegan) rainbow cake cannot be missed. It takes a bit of time to make the rainbow cake, but luckily it’s easy! It is one of our favorite cake recipes and super […]

Fruit salads are super tasty and easily made! Delicious for a summer picnic, barbecue, for dessert, breakfast or just as a healthy snack full of vitamins. Fruit salads are just part of summer, don’t you think? Of course, you can make a fruit salad all year round, but on a beautiful summer day a fruit […]

It’s Pride Month and that’s why we share rainbow recipes all month long! We previously made a rainbow paradise cocktail. But not only do we make rainbow-colored recipes, but we also share other important flag colors of the LGBTQ+ community. Earlier we made a frozen cocktail in the colors of the bisexual flag and today […]

A richly filled rainbow Buddha bowl with lots of vitamins! This Buddha bowl vegan recipe is not only very tasty, it is also colorful. Eating the colors of the rainbow is also healthy. But we will tell you more about that later! Are you ready to make this hip colored and healthy bowl ?! Go […]

Wow, forget about cocktail nuts: these spicy roasted chickpeas are my new favorite (and healthy) snack! This chickpeas recipe is not only tasty, but also very easy. Go to the recipe Are Chickpeas Healthy? Chickpeas are legumes and are good for your health because they lower LDL cholesterol. That is good for the blood vessels. […]

Read More
We use cookies to ensure that our website runs as smoothly as possible. If you continue to use the website, we assume that you agree.OkPrivacyverklaring