This quick and easy apple beignets recipe (without yeast) is really great! It is always a party when we start baking apple beignets.

Our apple beignets recipe is easy to adjust, so you can easily make vegan beignets if you want! This is one of our favorite apple recipes. Or vary with pineapple slices instead of apple.

Go to the recipe

What do you need for this apple beignets recipe? And how do you make them? We are going to tell you all! Get 3 sweet and sour apples, self-raising flour, sugar, cinnamon, and sunflower oil. You also need beer, water, or milk.

Beer makes your batter fluffier, gives the batter an extra flavor, and ensures that the crust is nice and crispy. Use a beer with a high fermentation (dark beer). Alcohol evaporates from 170 °F (78 °C), so there is only a little alcohol in the final beignets.

You can also use water or milk instead of beer.

How to Make Beignets?

Mix all ingredients together and then put the apple rings through the batter! Then the apple beignets can be baked. It’s really not difficult. And you have delicious homemade beignets as result.

Apple beignets are very easy to make vegan. Use vegan beer, water or vegetable milk and you have vegan beignets!

Freezing apple beignets is possible, but the apple beignets will become very smushy. Store them in the freezer in an airtight container for up to 3 months.

* beer makes your batter lighter. Use a beer with a high fermentation (dark beer).

Alcohol evaporates from 170 degrees Fahrenheit (78 degrees Celsius), so there is little alcohol in the final apple beignets.

Vary! Use pineapple slices instead of apple! 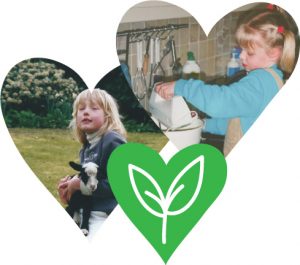 We are Roxanne (L) & Maartje (R). Roxanne is a huge animal lover and Maartje has loved cooking all her life. Nowadays, we are of course a little older (27 & 25).

Do NOT follow this link or you will be banned from the site!